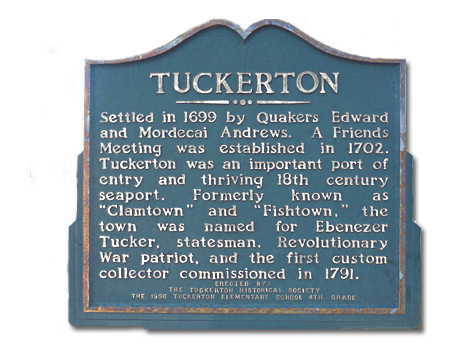 The area that is now Tuckerton was settled in 1699. Some of the early settlers were Andrews, Falkinburgs, Shourds, Ongs, Willets and Osborns. Edward Andrews settled on the east side of the Pohatcong Creek; his brother, Mordecai Andrews settled on the west side of the same creek. Edward, tired of going to Mount Holly Township with his grain, constructed a cedar log grist mill on the site of a dam built by beavers at the mouth of what is known as Tuckerton Creek. He built the grist mill in 1704, and it still stands to this day.

Tuckerton became a Port of Entry of the United States, but not the third port as is commonly believed, with Ebenezer Tucker appointed Collector, his commission bearing the date March 21, 1791, signed by George Washington and Thomas Jefferson. It was six years later that Tuckerton became a post town with Reuben Tucker as its first postmaster.
Former names of the town included "Andrew Mills", "Middle-of-the-Shore", "Clamtown", "Quakertown", and "Fishtown". In March 1789, Ebenezer Tucker hosted a feast at the then-named Clamtown for the residents at which time they officially changed the name to Tuckerton.
In 1816, Isaac Jenkins established the first stage line between Tuckerton and Philadelphia, making one trip a week, each trip taking two days travel each way. John D. Thompson bought the line in 1828 and ran the stages each way in a day and carried the mail. The stages and vessels were the only public conveyances to the cities until the Tuckerton Railroad was built in 1871.
What was probably New Jersey's first summer resort was on Tucker's Island off shore from Little Egg Harbor. The island sported boarding houses, private cottages, and a school. In 1848 a Lighthouse was erected there, with Eben Rider as its first light keeper. In 1869 the Little Egg Harbor Lifesaving's Station was constructed there. Also known as Sea Haven, the island contained two hotels. The island was wiped away in a storm, including its lighthouse, which fell into the sea. At the Tuckerton Seaport Museum a re-created lighthouse has been built as well as other re-created buildings that were on Tuckers Island. In the lighthouse there are several wall-mounted pictures showing the instant that the original lighthouse fell into the sea. The original island remains under water.
The area surrounding present-day Tuckerton was part of Burlington County until 1891 when it joined with Ocean County. Tuckerton was established in March 1901. with its first Mayor being Frank R. Austin.